Depending on the type of video you’re making, you probably don’t want any heavy breathing sounds in your voiceover recordings. The good news is if your mic is picking up breathing sounds, it’s actually pretty easy to remove breathing from audio – whether you’re recording on your iPhone or another device.

Noticeable breathing noises are a distraction that should be removed if they are prominent in the mix. Some minimal breathing sounds are natural but loud, heavy breathing is not good.

The best way to eliminate breathing sounds in the audio mix is to prevent them from being recorded in the first place. And there are some good ways to keep your mic from picking up breathing sounds.

However, sometimes you have to clean up less-than-optimal audio recordings and remove breathing from audio files after the fact (you’ll want a good pair of studio headphones for this kind of work).

Let’s discuss the techniques used by professional voice-recording artists to eliminate unwanted breathing and other noises in their recordings.

Things to Do While Recording 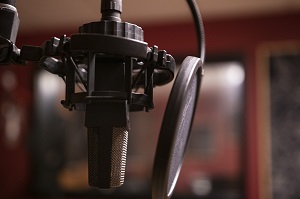 A pop filter is a physical screen that sits in front of a microphone. This device is used to slow the air that comes from “plosives.” A plosive is a word that causes a rapid rush of air to hit the microphone. A pop filter softens the sound of a plosive, such as words that start with the letter “P” and “B.”

Looking for a good pop filter on a budget? This Aokeo pop filter is a great choice and is less than $10!

This type of microphone is unidirectional. This means it only picks up sound from one direction in front of the mic. A tight cardioid pattern extends only a few inches from the front edge of the microphone. The mic does not pick up sounds that come from behind the mic or are further away.

To understand more about the recording pattern of a mic (also called a polar pattern), watch this explainer video from Shure.

Place a cardioid mic at a position that a voiceover artist can lean in to record the voice and lean back to take breaths. This is a very easy way to capture a clean voiceover as long as the voiceover artist knows how to use this technique properly. All the breathing is done slightly away from the mic and, therefore, it is not recorded.

It is better to have a mic about 45 degrees above or below your mouth when recording a voiceover and just close enough to be in the audio pick-up range. Recording a voice at an angle and not straight on is usually better. Be sure you are not recording the voice too “hot,” (at too high of volume). When the mic gain (volume) is turned way up, this can introduce unwanted noise, as well as make breathing sound more prominent in the mix.

Experiment with different mic placement and intentionally make unwanted sounds from different distances and angles to see how your microphone’s pick-up pattern works.

4. Use a Noise Gate When Recording

A noise gate is a piece of electronic equipment or software that controls the audio input signal. When used with a voice over microphone, a noise gate automatically stops the audio signal coming from the microphone when the volume is below the gate threshold. Breathing sounds at lower volume levels are blocked from being recorded when a noise gate is used properly.

This is a great way to reduce background noise, whenever you use your microphone.

5. Use Proper Breathing Techniques When Recording

Professional voiceover artists train in breath control so that they can deliver lines or read narration without making breathing sounds. They do this by controlling their breath, using the mic properly, and breathing through their nose instead of using the mouth.

It requires a bit of practice; however, talented voiceover artists are able to use slow, steady, deep-breathing techniques that are absolutely silent. You can practice by turning on your recording system and just recording your breathing until you can do it for extended periods in complete silence. And don’t think this is just for pros. This can work for amateurs recording on iPhones too!

You can also learn some great breathing techniques when taking voice over classes online. Another powerful method of voiceover recording is to break up the narration/script into pieces that can be recorded in one breath. This is the “Takes” method. It is the method most often used in voiceover acting with the voiceover artist repeating the same thing over and over (as in “Take 1”, “Take 2”, etc.) until it is perfect.

Things to Do While Mixing Recorded Audio

If you listen to recorded audio and hear breathing and other unwanted noises, don’t despair because there are things you can do to remove these sounds to improve the audio quality. I use open-source, free software called Audacity; however, the techniques are similar when using other types of audio-editing software.

Here are some simple tips to remove breathing from audio:

If the unwanted breathing or other sounds are just in a few places in the recording, you can go through using a sound editor program to find and adjust those sections. When the unwanted part comes up, don’t cut it out or use complete silence. Instead, reduce the volume to eliminate the distraction and still keep the recording pace intact.

Here are the steps: If you use silence to replace unwanted sounds, it gives an uncomfortable feeling that all the sound disappeared, instead of the room being quiet.

If you are using Audacity as your audio editing program, there is the Envelope Tool that allows you to easily select a section where you want the track’s volume to adjust smoothly over time.

You do this by setting control points in three places:

The control points are the beginning, middle, and end points of an exponential curve that makes the sound volume adjustments perfectly smooth. The volume changes are not abrupt or disturbing to the listener. If you use noise filters, you must be careful that you don’t introduce a pulsing sound or other unwanted noises that are a distraction. These strange noises come from over-processing the sound.

10. Use a Noise Gate in Audio Editing

Gating can be applied using software when editing audio. A gate (also called a floor) attenuates audio that is below a certain threshold. Ironically enough, if you overuse gating, you may accidentally create an unwanted sound that is like a pulsing noise, which sounds a bit like distorted breathing as the gate goes on and off.

You will need to adjust the noise gate settings, run the gating, re-adjust the settings, and then fine-tune the results to get the best sound.

To use Audacity plugins, you will need to download and enable them from Audacity plug-ins. Get the plug-ins that you need, if you don’t already have them installed.

In this short video by Olivio Sarikas, he shows how to use the noise gate and auto duck plug-ins with Audacity to remove breathing sounds from audio recordings.

Here is a newer and longer video showing techniques on how to remove breathing or mouth noises and how to meet the ACX requirements for audiobooks, which is a nice standard to follow.

11. Use a Compressor in Audio Editing

A compressor is like a gate except it attenuates audio that is above a certain threshold. This can reduce sudden loud spikes in volume such as the distraction of pops, clicks, or lip-smacking if they are really loud.

12. Use a Noise Reduction Profile

It takes a bit of playing around with this to make it work well but it is worth a try and may save time when compared to having to manually remove all the breathing noises.

In this video, Fra Oaks shows how to use noise reduction and auto duck in Audacity to automatically remove breathing from an audio recording.

If you use Waves with Pro Tools audio editing software, you should get the DeBreath plug-in for around $30. It uses a sophisticated algorithm that automatically detects the difference between a speaking voice and breathing. This excellent tool allows you to control how much of the breathing you want to eliminate and how much you want to be processed.

In this video by Andy Maher, he shows how to use the DeBreath tool.

When using the iZotope RX Studio software, use RX 8 Advanced Breath Control, which is expensive (around $1,200). It is the most professional tool that is the industry standard when processing audio for television shows and movies.

In this video by BenoniStudio, there is a nice review of all the features of the iZotope RX 8Advanced to get an overview of what is possible using this powerful software.

Having done voiceover work for many years, I developed a very deep resonant voice that sounds perfect naturally without enhancement. I can easily record voiceovers while using silent breathing.

However, I also get lots of audio files to edit and repair that are lower-quality with unwanted noises. I find using Audacity best suited for my needs since the audio recordings that I edit are used for podcasts, YouTube videos, and whiteboard animation videos uploaded to the Internet.

After fixing the problems with audio check out my tips on how to make a voiceover demo!